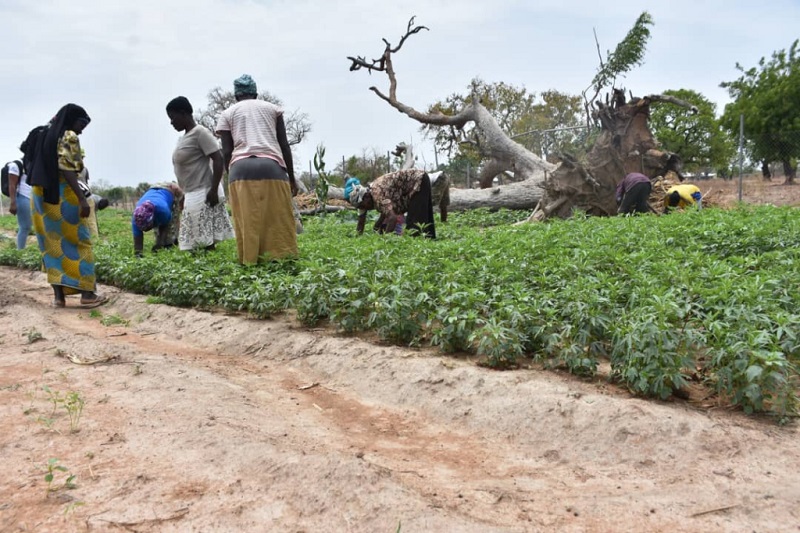 Some 806 Ghana Agricultural Sector Investment Programme (GASIP) trained cashew seedling growers from 40 nurseries in six regions of the country have been certified.

After undergoing a 10-month intensive training period, the growers can now nurse and grow seedlings for commercial purposes thanks to the certification.

They can also be contracted by the government as a dependable source for the provision of seedlings at a reasonable price.

In support of the “Green Ghana Day” project agenda and other private plantations, the growers already provided over 400,000 cashew seedlings from nurseries before the certification.

Speaking on behalf of the National Programme Coordinator, Mr. Klutse Kudomor, at an event to wrap up the activities of the Agroforestry project under GASIP at Jirapa, the Climate Change Adaptation Manager, Dr. Edmund Kyei Akoto-Danso, said the project is in line with PERD to create livelihood and business opportunities for smallholder farmers.

He called on interested parties to support the project’s commercialization.

“It is our expectation that, districts assemblies, forestry commission, and all other stakeholders will support the commercialization of the seedlings project by making these nurseries their first point of call,” he said.

In order to ensure that smallholder farmers receive their fair share of the profits generated by the production of tree crops in the private sector, Dr Akoto-Danso made an appeal to all stakeholders to take action and seriously play their respective roles in the project.

He said it will spur local communities to plant more trees and to take an increased interest in defending the environment from the shattering effects of climate change.

“As you are well aware, combating climate-related risks ensures environmental sustainability. For us in GASIP, this makes the smallholder farmer more resilient to climate change,” he said.

According to Dr. Akoto-Danso, the GASIP is in line with the government’s thematic policy areas, including the flagship program, Planting for Export and Rural Development (PERD), which is aligned with the agroforestry intervention.

According to MoFA, by increasing and diversifying Ghana’s tree crop production and export potential, PERD hopes to lessen the country’s excessive reliance on cocoa as a source of tree crop export revenue. Rubber, coconut, oil palm, cashews, and coffee have the potential to bring in $20 billion annually for PERD.

With the development goal of increasing the profitability and climate change resilience of agribusinesses and smallholders, GASIP aims to help reduce poverty in rural areas of Ghana.

The Institute for Nature and Environmental Conservation (INEC), whose executive director played a key role in assisting the farmers with their training, expressed complete satisfaction with the results.

PERD seeks to increase and diversify Ghana’s tree crop production and export potential, and reduce over-reliance on cocoa for tree crop export revenue. According to MoFA, PERD has the potential to rake in US $ 20 billion annually through rubber, coconut, oil palm, cashew and coffee.

The Goal of GASIP is to contribute to reducing poverty in rural areas of Ghana, with the development objective of enhancing the profitability and climate change resilience of agribusinesses and smallholders.

“As you are all aware, GASIP is being implemented by the Ministry of Food and Agriculture (MoFA)”

According to David Kwarteng, local residents were also given grafting training, polyclonal seeds, and other tools to set up a productive nursery.

He said the institute anticipates that beneficiaries will use their newly acquired skills to run nurseries in their neighbourhoods as the primary source of seedling supply.

“This is like giving them seed money to start a business. What we expect is a sustainable business,” he said.

Kuma Sampson, one of the beneficiaries, and his group from a community in the Salwa-Tuna Kalba district raised 9500 seedlings and initially sold 3000 of them.

As a part of their efforts to lessen the devastating effects of climate change, Kumah stated they had planted some of the cashew seedlings on their farms.
806 GASIP seedlings growers certified after 10-month intensive training

The program has turned into a source of income for the locals in various municipalities and districts.

The beneficiaries of the empowerment program to increase their daily income included about 420 women.

Even though the short-term positive effects of the program are already being felt, maize farmer Cynthia Takyi from Tanaso in the Bono East region expressed optimism for longer-term benefits.

She said, “If farmers want, I can provide the seedlings for them.”

Cynthia remarked that her group had sold the seedlings they had grown, and some members, including herself, had saved their proceeds—800 cedis—at the bank for potential investments.

Despite the fact that the training program has ended, various districts and municipalities’ directors of agriculture have expressed their support for the recipients.

For instance, Joseph Kambunaba, the municipal director for agriculture in Jirapa, described how the program had been successful in giving the recipients the inputs they needed to reach their goals.

He said, “GASIP has done a good job.”