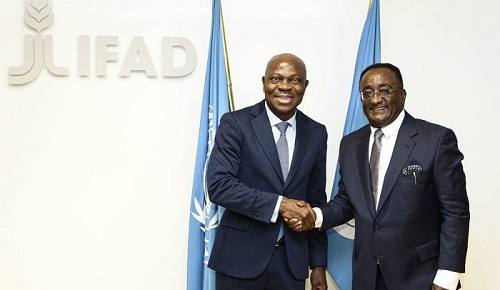 The Minister for Food and Agriculture, Dr. Owusu Afriyie Akoto, has made a strong case for a $105 million from the International Fund for Agriculture Development (IFAD) under the United Nations for the implementation of the Ghanaian government’s agricultural flagship programme – Planting for Food and Jobs(PFJ).

The facility is under Cycle Two of the Ghana Agriculture Sector Investment Programme (GASIP) which is meant to support the capacity of smallholder farmers in the country under the government’s flagship programmes.

The request follows a successful completion of Phase One of the programme in 2019, which saw the disbursement of over 60% of the funds to beneficiary farmers within the spate of six months under a new team put in place by his office to ensure the implementation of the programme.

Following this feat, Dr. Afriyie Akoto said yesterday that the ministry was seeking the immediate release of $30 million to consolidate the gains made in 2019, plus additional $75 million for long-term investment.

The minister, who made the request during a meeting with the President of IFAD, Gilbert Houngbo, at the just ended 43rd Session of the Governing Council of the Food and Agriculture Organization (FAO-UN), said the timely release of the facility would not only help Ghana consolidate gains made under PFJ over the past three years, but also it would help meet the demands of over 50,000 smallholder farmers who could not be supported last year.

The Ghana Agricultural Sector Investment Programme (GASIP) has held a five-day training programme for smallholder farmers on sustainable farming through the adoption of conservation agriculture at Amanchia in the Atwima Nwabiagya Municipal Assembly in the Ashanti Region.

In all, 48 participants made up of 36 farmers and 12 extension officers took part in the programme aimed at equipping them with sustainable farming and conservation skills.

The farmers were taken through topics such as concepts of conservation agriculture and principles, land preparation and planting, soil health, weed control, farm business management and gender.

It is being implemented by the Ministry of Food and Agriculture with support from the International Fund for Agricultural Development (IFAD).

Addressing the participants, Dr Edmund Kyei Akoto-Danso, the Climate Change and Adaptation Manager at GASIP, said building climate change resilience was an integral part of the programme, adding that the main objective was to mainstream adaptation strategies into value chain interventions in the agricultural sector.

According to him the primary focus was the demonstration and promotion of conservation agriculture and other climate-smart agriculture practices.

This, he said, was to ensure sustainable production systems and also improve the resilience of smallholder farmers against the negative impacts of changing climatic conditions.

Dr  Akoto-Danso said that under the activities of the Climate Change Resilience sub-component of the programme, over 500 hectares of conservation agriculture fields would be established in 10 districts in the Northern, North East, Upper East, Upper West regions.

He said one district each in Bono and Bono East regions would also have demonstration fields by December this year.

In all, he said, over 3000 smallholder farmers would directly benefit from the demonstration fields by the end of the year.

A participant, Mr Sulemana M. Zaapayim from Dulzugu in the Kumbungu District, expressed gratitude to the organisers for the initiative, which he said would greatly help small holder farmers to cope with the changing climate in order to remain in business.